A few days ago I was asked to write an Op Ed column for the Toronto Star to commemorate both Black History Month and the Bincentennial of the War of 1812. http://www.thestar.com/opinion/editorialopinion/article/1127137–richard-pierpoint-a-very-canadian-hero

The monument had been erected in 1900 as a memorial to all the British/Canadian units that had fought in the War of 1812. All the big British regimental names were at the top followed by the lesser known Canadian units and then at the very bottom, almost obscured by untrimmed grass, was The Coloured Corps and Indians.

Even then I prided myself on being well informed in Canadian history but until I saw that monument I had never heard of the Coloured Corps. For some reason I decided that their story needed to be told. This, unfortunately, was the pre-internet era when research meant hunkering down in a library and my only Search Engine was a knowledgeable and infinitely patient librarian. The facts came agonizingly slow but I eventually discovered that the Coloured Corps of Upper Canada was a unit of free Black soldiers who fought for the British/Canadian side during the War of 1812. They so impressed their contemporaries that they were one of the first units called back into service during the 1837 Rebellion and they were kept in the field until 1851, one of the longest and most distinguished service records of any Canadian militia unit.

But the most startling fact to come to light for me was that I actually had a Coloured Corps connection. After the 1837 Rebellion some Coloured Corps veterans were given land grants near where the village of Priceville, Ontario, now exists. My mom’s ancestors settled in this area. In fact, my parents bought a 28 acre abandoned farm near Priceville. We spent many a summer evening camped out around a homemade fire pit nestled in the stone foundations of a tiny barn. 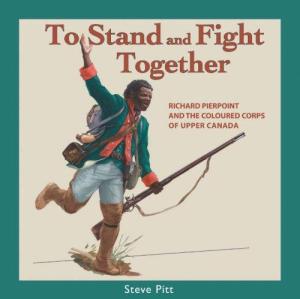 Just as I was about the publish my magazine article about the Coloured Corps in 1995, Grey County historians discovered that a small corner lot of a piece of property two lots east of my mother’s land was a 19th century “Negro Burial Ground” where veterans of the Coloured Corps of Upper Canada were buried. It is very possible that even the land my parents bought was homesteaded by a Coloured Corps veteran but I haven’t established that fact yet. Still, it makes you wonder how an Anglo-Celtic mutt like me became so obsessed about an all-Black military unit from another century long before he knew they had a common link. Was it just the famous six-degrees of separation rule proving its truth or was it something else – maybe a sixth sense from spending so many nights with my ear to the very ground where members of the Coloured Corps once walked?

Posted by Steve on February 13, 2012 in Uncategorized